Creating a setup step: Using variables in your tests

Using setup steps to capture variables and parameterize HTTP requests allows you to test a wide range of use-cases for your web service. Here's how it works with Assertible.

Signup for a free account to start testing your API

When testing an API, there are often cases where you need to use data from another HTTP request in your test. For example, to test a /users/{{userid}} endpoint, you first need to call /users to get a {{userid}}.

Assertible's setup steps give you the ability to do this by capturing variables and substituting them in your test before it is run. Let's walk through creating a test for our /users/{{userid}} endpoint and using a setup step to populate the {{userid}}.

Outline of our process

_If you haven't set up your web service yet, check out our [quick start guide](/docs)._

When we're done, we'll have a test for a dynamic API endpoint with assertions using dynamic data:

Create a new test for your web service

The double-brace syntax around the {{userid}} in the endpoint is a test variable. Before the test is run, the variable will be populated with the data from our setup step.

If we run our test now, it will fail with a 404 because the {{userid}} variable wasn't populated with any data. Let's move to the next step and get our test using the correct user id.


Make a setup step and populate a variable

Now that we have a test for our API using a variable, we need to populate our test variable with some data. There are a couple ways to do this with Assertible:

For our /users/{{userid}} endpoint we'll use the first option. Our setup step will make an HTTP request, before our test is run, to call the API's /users endpoint and save an id from the response to the {{userid}} variable.

Create a setup step by visiting the "Setups" tab of your new test and choosing "Add setup step". Next, configure the setup step to make an API request and capture a variable from the response. Your settings should look like this: 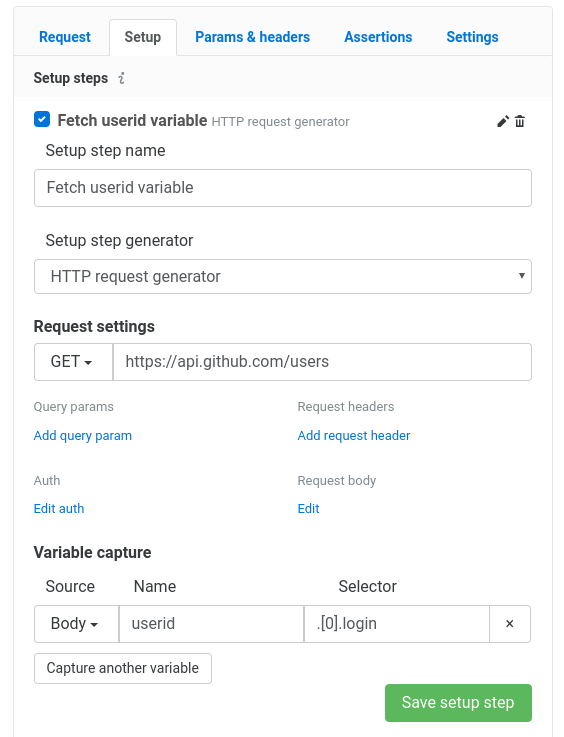 When you have everything filled out, save the setup step and enable it for this test. Now the {{userid}} variable in our API endpoint will be replaced with data from the setup step! If we run the test now, our 200 OK status code assertion will succeed and the test will be passing.

Prop tip! Variables can be used in assertions as well as test settings like an endpoint. Learn more.


With a passing web service test, we can start creating better assertions for the API response and make our test more robust. Using the JSON path data assertion, we will test that the /users/{{userid}} endpoint is returning the correct data for the userid parameter.

On the "Assertions" tab of your test page click "Add assertion", and for the type of assertion choose JSON path data. This assertion allows us to use the JSON path selector syntax to assert that the .id field in the JSON API response is equal to our {{userid}} variable used in the endpoint: 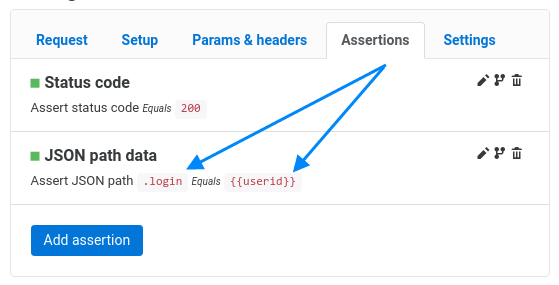 Every time our API test is run, we are asserting that the /users/{{userid}} route returns the correct user data for the user id that was provided. The end result will look like this: 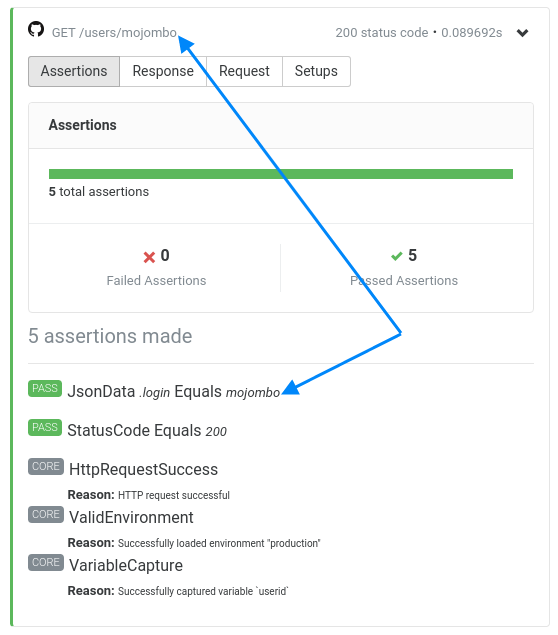 To sum up what's happening in our test:

There's a lot more you can with setup steps, test variables, and JSON path data assertions. Check out more examples in the docs and create your free Assertible account to get started today!

If you have any questions or feedback, send us a message or reach out on Twitter!