At Assertible, we want to promote best practices, reliability, and simplicity in our API testing platform. It's important that tests are reproducible while being flexibile enough to model real-world use cases and validate a series of HTTP requests.

This is why we're exicted to release teardown steps, the counterpart of setup steps. A teardown step is an HTTP request that runs after the test, and can be for things like testing logging out of a web app or removing test data left over from the test. 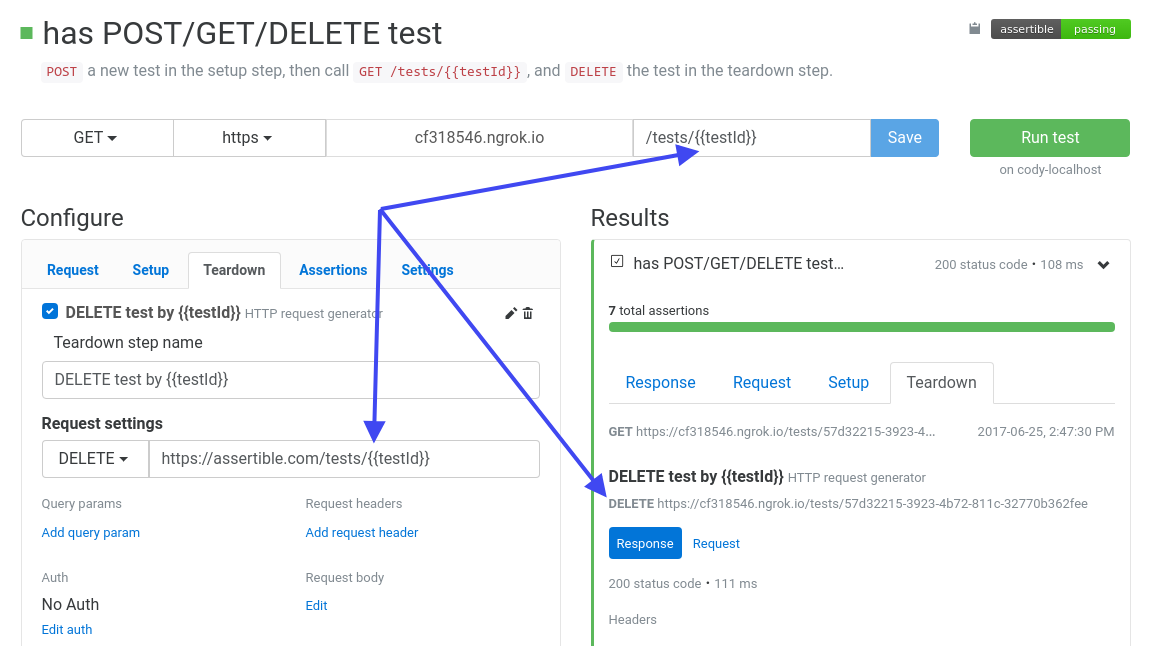 Using teardown steps to clean up data from the test

Signup for a free account to start testing your API

For a basic example, let's demonstrate testing a CRUD operation for a REST API. Pretend you have an API with a /users endpoint, and you want to create a test to validate POSTing a new user, ensure it was saved correctly, and delete the user after the test.

In Assertible, this would be a 3 part test:

This structure allows you to have a fully encapsulated, reproducible, and side-effect free API test. This test doesn't rely on previous tests setting variables correctly, and it doesn't rely on a complex series of requests as a pre-requisite.

When it comes to automating API tests, this structure is ideal becauase it lowers the probability of a flaky test, isolates test dependencies, and can easily be automated. This is a simple example, but displays the power of a structured API test framework and provides a good starting point to test more complex API workflows.

We have big plans for improving and extending setup and teardown steps as we continue to build and develop new tools for web service testing. Supporting capturing variables in teardown steps, and having multiple setup steps are on the roadmap, so stay tuned.

Have a good idea, question, or want to chat about Assertible? Find me on Twitter or reach out directly - I'd love to hear what you think!