Reducing the friction required to create and manage tests for your API and web apps is one of the big goals of Assertible. Providing the ability to create a new test on-demand, or re-import new tests from an API spec are big use-cases we've been working towards.

This is why we're extremely excited to announce two new features for creating and managing tests:

A primary goal of these new features it to make it easier to quickly add or update tests for your API by integrating with tools you already use.

curl is a command-line tool generally used to quickly make and script HTTP requests. A common use-case is to debug API requests and responses, and try various headers and parameters.

We're thrilled to release an import integration with curl that allows you to automatically create a new test for your web service by simply pasting in a command: 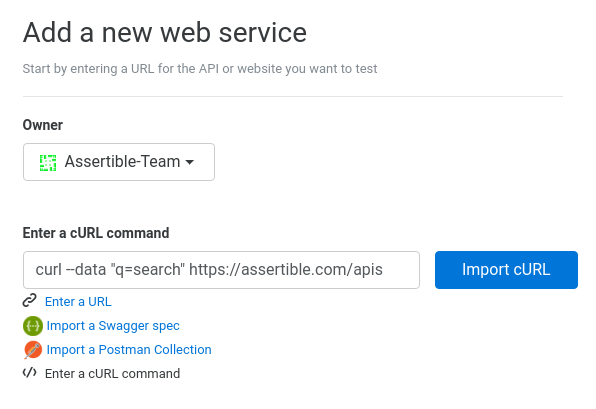 This provides a huge productivity boost for people already using curl. You no longer have to re-configure a test in Assertible: if you have a runnable curl command, just paste it in to create a new test! Check out the web service documentation for more information and examples.

API specifications, like Swagger frequently change as you add new endpoints and functionality to your APIs. For a long time, Assertible has had the ability to create automated API tests from a Swagger spec, but we've taken it a step further with a feature that let's you re-import your spec to sync new changes with Assertible.

This means that if you have your API tests set up in Assertible, and then later added two new endpoints to your Swagger spec or Postman collection, you can now re-import your spec to create tests for only the new endpoints. 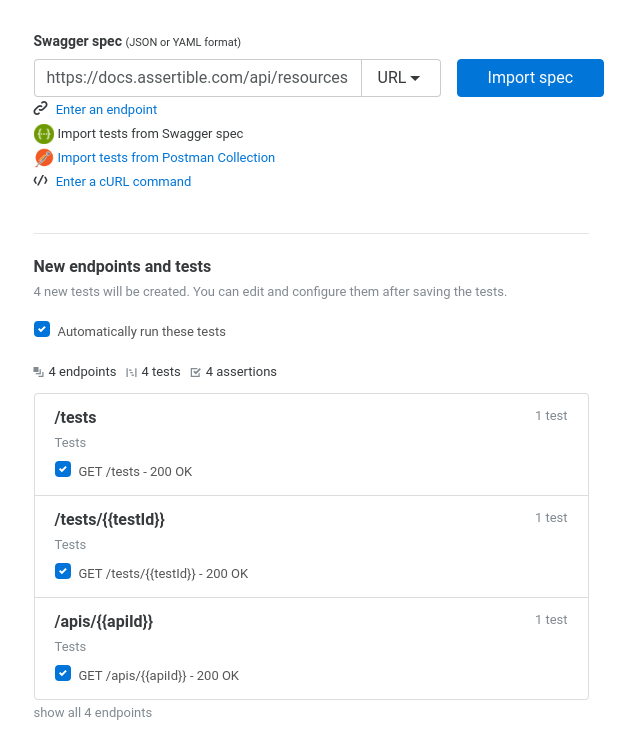 In addition to this, we've added the ability to select only certain tests to be imported. So if you don't want to import certain endpoints or re-create tests you already have, you can just uncheck them and only import new tests.

This was perhaps one of the most requested features regarding Swagger and Postman import we've heard, and are really excited to add this functionality. If you haven't tried it out yet, you can create a free account and give it a spin!

We've got a lot of plans regarding test creation and support various API specification formats, but we'd love to hear what you think! If you have any ideas or feature requests, hit me up on Twitter or contact us any time and let's chat!

Below are some additional resources about web services and tests in Assertible. If you're just getting started, or want to learn more, check out the documentation below: