Test and monitor your API Gateway endpoints with Assertible

AWS's API Gateway is a great tool that makes it easy for developers to create and publish an API. In this post, I'll show you how to set up automated API testing and monitoring for all of your endpoints.

Amazon's API Gateway is a tool for developers to easily create, document, and publish APIs. As with any API, automated testing and monitoring provides another layer of security that your services are available and working as expected.

It's easy to create create an automated test suite for your API Gateway endpoints by exporting your API as a Swagger specification and importing it into Assertible.

In this post, I'll walk through creating a basic API Gateway example in AWS and setting up API testing, monitoring, and alerts in Assertible. Here's the steps we'll take:

Getting started with AWS API Gateway is easy and heavily documented. If you don't already have an AWS account, you can sign up for free. After signing in, navigate the API Gateway service page, and you should see a Getting Started screen:

You have a new API managed in AWS!

From here, you can explore the API's endpoints and experiment with request and response payloads. I won't get too in-depth about all of the API Gateway features, but these extended resources are great for learning more:

Deploy the API from API Gateway

Next, the API needs to be deployed to a stage make it publically available. This step is also required before the API can be exported from the console.

Success! On the next page, you will see details about the API's deployment stage including an Invoke URL where your API can be accessed, and various other settings for managing your API.

With a new API created and deployed, we can export the API specification to a format that can be imported into Assertible.

Export the API as a Swagger spec

Assertible supports creating automated tests from a swagger spec, so you can export your API from the API Gateway console as a JSON or YAML Swagger spec and import it to get everything initially set up.

And that's it. A file should be downloaded for your Swagger spec, which can be used n the next steps. Learn more about exporting an API from AWS and other API formats Assertible supports.

Import your Swagger spec into Assertible

Assertible will create API tests for each endpoint/method combination in your Swagger spec. If you don't have account already, you can create a free one here.

In the New Service form, choose Import a Swagger spec, and upload the file exported from API Gateway 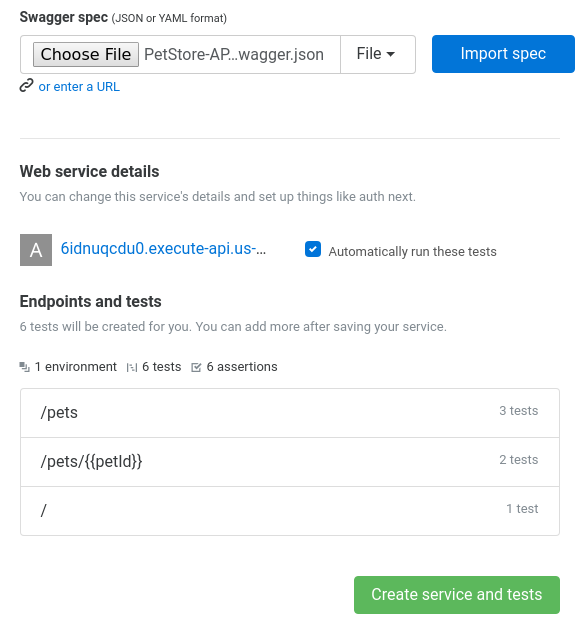 A dry run of your endpoints, tests, and environments is shown before fully importing the spec. Click Create service and tests to finalize the import and go to your web service overview.

If you have an API that requires auth, headers, or other settings, explore some of these resources to help get your API tests passing:

Set up automated monitoring and alerts

With an initial set of tests created for the API, you can set up automated monitoring to run them on a schedule. Assertible support various types of API test automation (check out the docs), and for this example I'll set up hourly schedule monitoring.

The API tests are now passing and running a schedule! Now you can continue to configure the rest of your settings like hooks and alerts.

Assertible has support for sending API test results to a slack channel or sending emails after test runs. Both of these can be configured from the Hooks & Alerts page of the Settings tab on your web-service.

We've covered the basics of creating an API in API Gateway and setting up automated monitoring with Assertible, but there's plenty more to do. Check out some of these resources below to learn more about both:

Have any questions, questions, or something to add? Shoot me a message on Twitter and let me know. Check it out and sign up for a free Assertible account to start testing and monitoring your API Gateway.